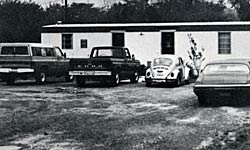 On June 30, 1969 the Board of Directors voted to organize the Kenton Rockwell Standard Federal Credit Union to serve the employees of Kenton’s Rockwell Plant and their immediate family. Membership fees were $0.25 per account with a minimum deposit of $5.00.

Board Members carried membership cards in their tool and lunch boxes and signed up new members on breaks and after work hours. Members were encouraged to use the credit union as a depository for a small amount of their checks as a forced savings plan for rainy days, weddings, Christmas, etc.

From this humble beginning came a desire from the Volunteers and Members to build up deposits and then allow themselves the luxury of borrowing against their shares in the credit union. Initial loans were $400 and were paid back weekly.

Throughout the early days, the credit union was located at various locations throughout Kenton. In 1975, the credit union had $250,000 in assets and felt financially stable enough to purchase a vacant lot on SR 68 South, which now houses the Main Office. The Board found a modular bank building in Huntsville, purchased this and began operations in a Credit Union owned facility. By early 1976 the Credit Union had opened a part time office and began serving members. 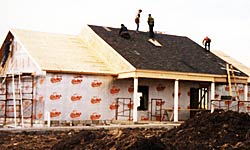 Into the New Millennium 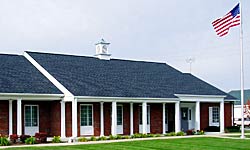 As assets and membership increased over the late 80s and early 90s, the need for more and better services became very apparent to the Board of Directors. In May 1994, the Credit Union opened its drive-thru services and added the first of ten local, No Fee ATM’s. December 1997 marked the transition of leadership to a new Manager when Matthew Jennings was hired to lead. The Board was very clear that the credit union needed to grow, change and diversify our assets and members, and they set the new Manager down this path. Membership growth and diversification became a staple for the staff to work towards while the credit union leadership positioned the organization to transition from a SEG credit union to a Community Charter credit union.

By June 1999, the Credit Union had grown to $17.5 million in assets and began work on expanding the existing facility on State Route 68 to accommodate administration and more loan officers.

In December of 2000 the Credit Union broke ground on a new facility located on Jacob Parrott Blvd. The “Jake” opened on August 27th, 2001. 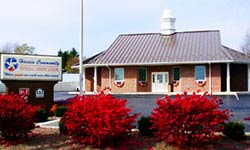 January 1, 2009 marked the beginning of a new era at the Credit Union when the NCUA granted a charter expansion to include Logan County in our area of operation. At that same time, the Board of the Logan Community and Hardin Community FCU’s respectively, agreed to pursue a merger of the two organizations which was completed in early 2009. Our Bellefontaine branch has a full service frontline, state of the art ATM and a loan officer to meet all of your lending needs. In 2020 we plan to remodel the exterior of the branch and give it a fresh new look.

2010 saw the credit union begin the realization of a long-term goal of our Board and Management Team with the construction of our newest branch located in Ada, Ohio. The branch offers a full service frontline, state of the art ATM and a high speed drive thru for all of your banking needs. The office is staffed with a Loan Officer to assist our members with their lending needs.

Our Board of Directors saw a need and an opportunity to serve a new county in our area and in 2013 applied to expand our community charter to include Wyandot County. At that time, there were no other community credit unions in the county and Quest believed that we could bring a needed option to the folks of the community by offering a full serve credit union. After we were awarded our community charter, Quest began looking for the right location and in October 2016 opened our 5th branch in Upper Sandusky. Much like our other locations, the branch is equipped with a full service frontline, state of the art ATM, drive thru and a Loan Officer to meet our members lending needs.

In the fall of 2020, the Board of Directors of the UAP Employees Federal Credit Union approached Quest about a potential partnership that would benefit members of both credit unions. Quest’s Board of Directors and Staff were thrilled to welcome the members of UAP FCU into the Quest family in the spring of 2021.

As we roll into the heart of a new decade, Quest is continuing to grow our assets, products, services and branch locations at a very measured, steady and strong pace. We are planning to further expand our footprint in Logan County. Quest broke ground on a new branch in the fall of 2021 and we will be opening our new Russells Point branch in the summer of 2022.

Quest offers a full line of financial service products, state of the art technology and unmatched member service. Our Board of Directors and Management Team meet annually and thoroughly discusses our current position, what we need to improve upon in the near term and what our goals are for the long term to create the best environment to serve and benefit our member/owners. We pride ourselves on the fact that we are responsive to the needs of our communities and do everything within our control to educate, promote and assist our member/owners.

The Board of Directors and Staff would like to thank our membership for their loyalty and support and if you are not yet a member, we invite you to join Quest Federal Credit Union and “Explore the Possibilities”.

The Board and Staff Members of the Credit Union strive to not only serve our members to the best of their ability, but also to give back to their community. We are proud that all of our employees are residents of Hardin, Logan, and Wyandot Counties and all are active in their schools, churches, civic organizations, fraternal organizations and much more. As a financial cooperative, Quest Federal Credit Union is committed to the cooperative principle – “Concern for Community”. As such, we contribute heavily through donations and volunteer service to many organizations, schools, clubs, and community groups throughout our charter communities.

As a federally insured credit union, Quest is beholden to a promise made at the inception of credit unions in the United States to serve all members with the motto of “People helping People”. We view community support in much the same way, when asked for help and if we have the means, Quest is happy to support local community groups, charitable organizations, youth activities and much more. We are asked from time to time why we heavily support most all community events and projects, and the answer is simple, that is how we help each other to build a strong community. If we all chip with our funds, talent and volunteerism, everyone is lifted, and we improve the quality of life for all.

In closing, the Credit Union was conceived by and built by local hardworking individuals who knew that they could make a difference in the lives of their families and the lives of people in our community. We have 14 Board Members who volunteer their time to the Credit Union and have contributed countless hours to the betterment of the lives of our members. These are men and women of our community who have given of themselves to make their lives and the lives of the men and women who live, work or worship next to them better. Quest Federal Credit Union now boasts $125 million in assets, 14,000 members and new services being added as we speak. Explore the Possibilities!